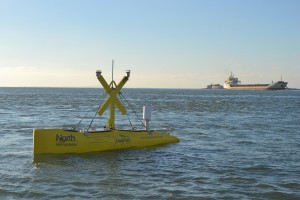 Datafish in situ at Yarmouth site

North Sea Systems, based in Poole Dorset, collaborated with Kongsberg Maritime to conduct a passive acoustic monitoring programme at the Isle of Wight Nursery site. Located just off Yarmouth, the site is regarded as one of the prime locations in the South for potential tidal turbine development programmes.

Following collection of the data, engineers correlated AIS vessel movements with specific noise events in the data record.  The DataFish® provides an ideal platform for such a survey, not only for powering the instruments, but also for transmitting the data in close to real time.

Establishing baseline acoustics at this time will enable renewables developers to monitor any impact of marine turbines and vessel movements on mammals. This work will continue to support renewables project consenting in the Isle of Wight Nursery site.

Ben Baker, Commercial Manager of North Sea Systems, commented: “We were delighted to join forces with Kongsberg Maritime on this important project, which allowed us to demonstrate the flexibility of the DataFish® survey device. We are committed to supporting the renewable energy sector and look forward to undertaking many similar projects in the future.”

Peter Ward, Kongsberg Maritime Product Manager for K-PAMS, said  “the fact that the  DataFish® could be used for acoustic monitoring over extended periods of three-to-six months, allowed  K-PAMS to be deployed in a wide variety of applications such as  marine energy environmental impact assessments, shipping noise surveys, and during construction projects where piling or explosive noise can be problematic“.

During the Nursery site project, the K-PAMS hydrophone was installed between the Datafish® buoy and its mooring and measured acoustic activity, feeding back instantly to the data collection point. This has allowed the Kongsberg Maritime engineers to start building a picture of marine activity, so the effect on future tidal site development can be monitored, and the potential impact on the marine environment to be observed.

Peter Ward continued “the renewables sector is one of the fastest-growing areas of Kongsberg Maritime’s services portfolio and we are pleased to have been able to work in partnership with North Sea Systems in this project. The data that has been collected will be critical to the future development of this key tidal energy site. Lost equipment, failed deployments and poor quality data in highly energetic environments have plagued tidal turbine and wave energy developers in the marine energy industry in recent times. In bringing together K-PAMS and DataFish® we have created a system that can be safely and accurately deployed, recovered and reliably operated.”